Mike Deats graduated from Wits in 1954 with a degree in mining engineering and began his career with De Beers. A move to Iscor saw him rise to a position where he was responsible for all of Iscorʼs mining activities. He joined BP Southern Africa as Managing Director, BP Coal SA, in 1981 before moving to Eskom in 1988, where he reached the position of Executive Director, Generation, prior to his retirement in 2000.

I worked for Iscor Mining for nearly 25 years and was his late fatherʼs protégé, and Ben ended up being seconded to me by Hans Coetzee in 1975 as I was then in charge of the opening up of the Waterberg Coalfield Project. He came from Samancor and was exposed to my rather unique style of management/mentorship. Hans indicated to me that he wished the Ben Alberts dynasty to be perpetuated in Iscor, but not for young Ben to be spared the whip. I didnʼt need any encouragement along these lines ...

However, not to damn Benʼs achievements with faint praise, I must add to his list of commendees a whole host of people and institutions that led to the successful accomplishments in the Waterberg. Press-ganging, shanghai-ing, dragging under protest of numerous cabinet ministers and, senior officials to site where they were brainwashed into the importance of establishing a mine and power station, were the order of the day. Not least among these was Water Affairs, who did not have the slightest intention of building a dam on the Mogol River when first approached.

Similarly, the late Hendrik Schoeman and Braam le Roux, when pushed into building a railway line between Thabazimbi and Ellisras ... thought we were nuts! We also hauled a 600 ton P&H electric shovel along the railway servitude from Grooteluk to Thabazimbi to cut the costs of dismantling the shovel when Thabazimbi was in dire straits regarding shovel capacity.

The top brass of Eskom did not have a power station up north in their planning in the 1970s but the coking coal mine could not have been mooted without a major power station offtake – this took some extensive persuasion.

We also ran out of money, and Dr Conrad Strauss from the Standard Bank came to our rescue with a massive loan. The Iscor mining team – headed up by myself and Ben during the period 1975 to 1981 – need to be recognized for their herculean efforts in establishing the Grootegeluk/Matimba project. 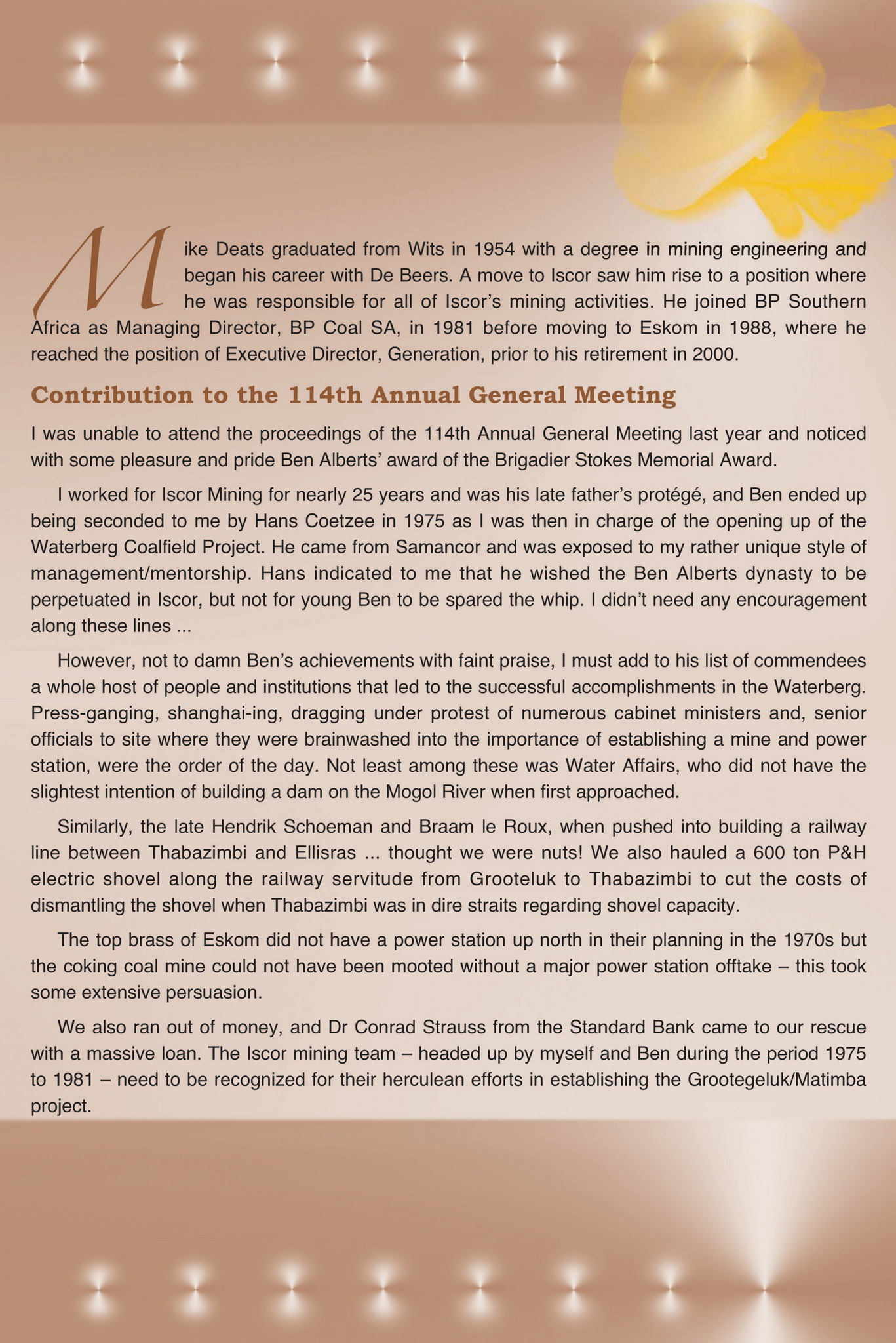