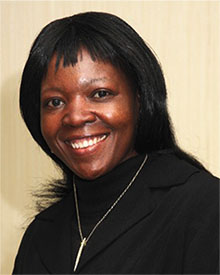 Herewith an introduction to the second female SAIMM president since the founding of the institute as well as the synopsis of her presidential address.

Sehliselo (Selo) Ndlovu was born in Plumtree, Zimbabwe in 1975. Selo holds a BSc Honours degree in Metallurgical Engineering from the University of Zimbabwe; a Diploma of Imperial College in Hydrometallurgy, London, UK, and a PhD in Minerals Engineering from Imperial College. She is a Fellow of the Southern African Institute of Mining and Metallurgy (SAIMM), a rated researcher with the South African National Research Foundation (NRF), and currently holds the Department of Science and Technology (DST) and the National Research Foundation (NRF) funded SARChI Research Chair in Hydrometallurgy and Sustainable Development at the University of the Witwatersrand, Johannesburg.

Selo undertook her secondary and high-school education at St Columba’s High School, which is located in Makokoba; the oldest suburb of Bulawayo. This is where she achieved ten distinctions for her Cambridge ‘O’ levels in 1992. She was the top graduating student in the Cambridge ‘A’ Levels in 1994. Selo then commenced her tertiary education at the University of Zimbabwe, where she gained her Honours degree in Metallurgical Engineering with distinction. Selo was an Anglo American bursar and during her undergraduate years, she spent all her student holidays attached to some of the Anglo American’s Zimbabwean operations in Gweru and Bindura. She found love both professionally (in Hydrometallurgy) and also personally (met her husband) during her time at the Bindura Nickel Smelter and Refinery. After obtaining her first degree, Selo worked as a Process Metallurgist at a diamond mine in the Beit Bridge area, where she helped develop quality assurance and metallurgical accounting systems for the company.

Selo graduated with a PhD in Minerals Engineering in 2003. After obtaining her PhD, she spent some time as a research assistant at Imperial College, London. She was on her way to join a Canadian university when she was headhunted by the University of the Witwatersrand, Johannesburg. She heeded the call of Africa and joined the University as a lecturer in 2004. She was promoted to Senior Lecturer in 2009, and became Associate Professor in 2012, a rank she holds to date.

As an academic and researcher at heart, Selo lives by the saying that ‘a candle loses nothing by lighting another candle’; she is very passionate about capacity-building and providing knowledge to the future leaders of the minerals industry. It is worth noting that Selo not only lectures at both undergraduate and postgraduate levels, but also delivers seminars and courses to delegates from mining and mineral processing companies all over Southern Africa. In 2009 she successfully championed and motivated for the resuscitation of MSc taught and research degree courses in Hydrometallurgy at the University of the Witwatersrand, which had been discontinued in 2004 as a result of a lack of necessary qualified personnel in the hydrometallurgical area. She spearheaded the advertising and marketing campaign for the courses, which have now been running successfully since 2010.

Selo‘s areas of research are extractive metallurgy in general, and hydrometallurgy and biohydrometallurgy in particular. Her interests focus on metal extraction from traditional sources and the treatment of secondary metalbearing components such as process waste streams for metal recovery. She has supervised and mentored more than 30 MSc and PhD research students since joining the University of the Witwatersrand. Some of her former students have become notable established academics and industry leaders in their own right. Selo has published more than 40 peer-reviewed journals papers in her areas of research, written 2 book chapters, and recently co-authored a book. Her publications have been cited a number of times; her current h-index and i10-index are 17 and 21 respectively in Google Scholar. She has been involved in the examination of research theses and dissertations from both local and international universities. Selo has also been involved in collaborative research and teaching initiatives with local and international companies as well as universities in countries such as Namibia, Zimbabwe, the DRC, the USA, Nigeria, Argentina, and Germany. She has been invited to give keynote talks on different topics related to the minerals industry at a number of international events, and also served as a visiting professor at a few Southern African universities.

Selo has been the recipient of a number of awards. During her first degree studies at the University of Zimbabwe, she received the Arthur Bensusan Prize for being the top student in class for 2nd, 3rd and final year.

During her 3rd and 4th years, she received the university book prize. In 2009, she was awarded the Wits University Friedel Sellschop Award, which recognizes and encourages exceptional young researchers. She was subsequently profiled in the Wits Research Report of 2009 as part of the Wits New Generation of researchers undertaking innovative research in the university. In 2015, Selo was one of the 40 women in research who were awarded a DST/NRF research chair; the South African Research Chair Initiative (SARCHI) in Hydrometallurgy and Sustainable Development. Research chairs are designed to improve research and innovation capacity as well as the competitiveness of public universities in order to produce high-quality postgraduate students and research and innovation outputs. Selo is currently one of the few of women in the STEM fields and the only black woman in Engineering Sciences who holds a research chair. The research chair has allowed her to build critical mass and capacity for the minerals industry. Selo was also profiled in the Mail and Guardian as part of the series on women in research excellence in 2016.

Selo firstly became actively involved in the SAIMM as a co-opted member in 2006. She left in 2007 and returned as a Council member in 2012. She was elected an office bearer in 2014. She has served on the Metallurgy TPC since 2012. Selo has also actively served on the SAIMM Student Colloquium Organizing Committee and the former Career Guidance Committee. She currently serves on the Membership and Publications committees and is an observer member on the Young Professional Council (YPC). She has also served on the organizing committees of a few SAIMM conferences such as the Student Colloquium, the Hydrometallurgy Conference in 2009, and the Copper Cobalt Conference in 2015. In 2016, she was the Chair of the organizing committee for the Hydrometallurgy conference which took place in Cape Town.

Selo is married to Raphael Mwangobola (a mechanical engineer bitten by the mining bug), and they have been blessed with a handsome young boy called Michael Lihle. Selo loves to read all kinds of works and also has a passion for baking, although she seldom gets the time to do it. She also enjoys running and has taken part in a few marathons in the past. Selo is grateful to the Almighty God, family, friends, and various people for all the countless blessings and the support she has received in her life and feels honoured to be part of the SAIMM family. She believes there is nothing greater than the heart of a volunteer and is looking forward to contributing to the development of the SAIMM now and in the future.

Industry-Academic Collaborations: An Opportunity for the Minerals Industry during the Economic Downturn

Although collaborative partnerships between universities and the minerals industry have been ongoing for ages, the potential benefits that can be realized through such partnerships have become increasingly important and are more relevant now than ever. This is because the growing complexity of problems such as the depletion of rich and easy-to-treat ore deposits, rising production costs, water issues, and stringent environmental regulations, coupled with increasing economic pressure and hence budget cuts, has made it more difficult for companies to do all the necessary research in-house in order to remain globally competitive. Similarly, universities are continually faced with challenges such as a lack of steady financial support for their research and training programmes, as well as the need to have their research commercialized or applied to solve existing industry problems so as to enhance their reputations.

Although industry-academic collaborations generally lead to the creation of pathways to knowledge and technology transfer from academia to industry and vice-versa, industry and universities are sometimes dissatisfied with the ability to extract value from these partnerships. For example, the research partnerships generally entail various challenges such as intellectual property issues and confidentiality of joint projects. In addition, while industry in most cases seeks quick solutions to existing problems (e.g., through corporate profitdriven applied research), universities, on the other hand, may only value excellent research outputs in the form of publications (i.e., contributions to the public body of knowledge). As a result of differences in the motivations of universities and the industry, ‘perceived’ disappointing results can arise from the partnerships. Thus, one fundamental principle for developing industry-academic collaboration into a successful and beneficial partnership lies in each partner’s understanding of the working environment, missions, and motivations of the other.

This paper explores the benefits, challenges, and the best-practice approach for a successful collaborative partnership between the minerals industry and academic institutions in order to increase the capacity for innovation and growth in the minerals sector.