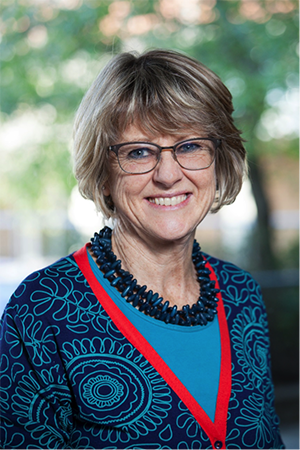 Emeritus Professor Dee Bradshaw passed away on 7th June 2018 after a courageous battle with cancer, just a few months short of her 60th Birthday. Throughout her illness, Dee remained a leading light and inspiration to students, colleagues and professionals across the globe. A major highlight for her in 2018 was the launch of her book “Green Mining: Beyond the Myth” at the Two Ocean’s Aquarium ahead of the Annual Mining Indaba - attended by senior representatives of the Minister of the Presidency, AngloGold Ashanti and the University of Cape Town (UCT) as well as colleagues, students, friends and family. The book culminates a career of thought leadership, a passion for people and minerals in collectively addressing complex, intractable problems in society.

Dee was born in Masvingo in Zimbabwe, the eldest of four children. She arrived at UCT in the late 1970s as a young undergraduate student entering a traditionally male dominated discipline and later graduated with a BSc in Chemical Engineering in 1981. With a young family to support, Dee started work as a part-time research assistant in the Flotation Group at UCT in 1983. Over the course of 25 years in this group, Dee emerged as an independent researcher with an international profile for her expertise in flotation chemistry, both in industry and academia. She also initiated several new research activities including the Depressant Research Facility and Process Mineralogy – both of which are still going strong within the Centre for Minerals Research. Following an industry-based sabbatical in 2007, Dee moved to Australia to take up a Professorship at the Julius Kruttschnitt Mineral Research Centre at the University of Queensland in Brisbane. Dee later returned to UCT in 2015 to take up a National Research Foundation South African Research Chair in Mineral Beneficiation and step in as Director of the interdisciplinary Minerals to Metals research grouping hosted by the Department of Chemical Engineering – posts which were both aimed at building a platform for sustainable development in Africa through metals and minerals, and which she held until her retirement in February 2018.

Dee Bradshaw was ever passionate about inspiring, nurturing, challenging, creating opportunities, guiding and mentoring countless young lives across the world in the minerals industry and beyond. In 2013 she received an award from The University of Queensland for excellence in post graduate supervision, which recognised her as a leader who nurtures and develops her graduate students, a concept she called ‘Living Gold’. Just a few weeks prior to her passing, she established the “Dee Bradshaw and Friends International Travel Scholarship” for postgraduate students in the Minerals discipline as her legacy to UCT. Donations to this initiative can be made at:  http://www.ebe.uct.ac.za/sites/default/files/image_tool/images/50/News/2018/Dee%20Bradshaw%20%26%20Friends%20donation%20letter.pdf

The SAIMM and the Western Cape Branch in particular, is deeply indebted to Dee for her dedicated and passionate contributions over almost four decades. She will long be remembered by all those with whom she came into contact – and as the “Living Gold” continues to live on.

This obituary was first published by Campus Communications. University of Cape Town on 7th June 2018