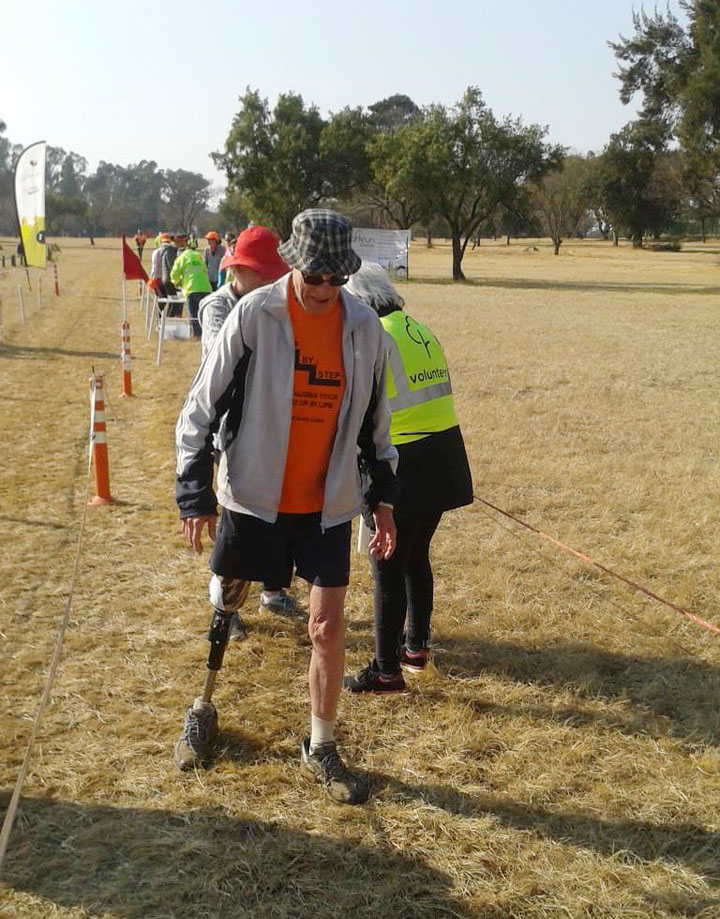 Until the beginning of this year, Peter Knottenbelt was an ordinary Ebotse parkrunner with 14 parkrun finishes to his name. (Well not so ordinary; running in the VM 70-74 age category Peter had a recent PB of 26;33 and a 67% age grading, run at altitude on the tough Ebotse course).

All this changed while Peter was on holiday in the lowveld near Hoedspruit at a lodge on the Olifants River. Peter and friends and family were having fun in the river and decided to wade across to the far bank. They had been assured that there “are no crocodiles in the river and none have ever been seen in this stretch of the Olifants” At the far side of the river Peter trod on the bony head of a 3 metre long Nile crocodile which promptly seized him by the leg and tried to drag Peter off to drown in deeper water. There followed a harrowing battle in which Peter was severely wounded and tried desperately to thrust his thumbs into the crocodile’s eyes. So hard was he pushing that he also broke his wrists with the effort. It must have been a terrifying experience to realise the blood in the water was his own.

Perhaps Ebotse parkrunners don’t taste particularly nice (All that lactic acid from running fast times) but amazingly the crocodile suddenly spat Peter out and tossed him aside. There followed an emergency helicopter flight to hospital and months in a hospital bed. Sadly, Peter also lost his leg as he was forced to undergo an emergency amputation. After that Peter endured weeks of rehabilitation and he was fitted with a prosthesis.

Most ordinary people would have abandoned any thought of participating in a parkrun again but Peter Knottenbelt is not an ordinary person and last month he returned to walk Ebotse parkrun with his artificial limb. I doubt if there was a dry eye at the finish funnel. It took Peter over an hour to complete the 5kms but he was given a hero’s welcome at the finish. Peter we salute you for your courage and look forward to welcoming you at many more parkruns.

Message from Peter Knottenbelt (Hon Life Fellow of SAIMM and mining educator for 40 years in SA): The industry is tough and getting tougher for those entering the industry to go into the workings of mines. There will be down times but the good time cycle will always be on the horizon. The answer is to build strength (physical and mental) to handle challenges – to develop resilience. My recommendation is that one commits oneself to use the stairs rather than the lift in all possible cases. This is certainly what contributed greatly to my truly miraculous recovery – the wind is now in my sails to recover as fully as possible and contribute further youth development with the aim of supporting a better future for all in SA.