South Africa has the largest land-based manganese resource in the world. The Kalahari Manganese Field (KMF) is based in the Northern Cape Province. Although the ores mined are primarily exported, some are also smelted locally to produce manganese ferroalloys. In order to support the smelters, and foster collaboration between researchers in the field, the SAIMM successfully hosted two Schools on Manganese Ferroalloy Production in the past, the 1st in 2012 and the 2nd in 2016.

At the 3rd School, the conversation will be continued.

The SAIMM is honoured to have members of the PreMa Consortium as event participants. The PreMa project aims at demonstrating an innovative suite of technologies, involving utilization of industrial off-gases and solar thermal energy, to reduce energy consumption and CO2 emissions from manganese production as a means to obtain sustainable production of Mn-alloys and steel. The project is funded by the Horizon 2020 program of European Union, and European and South African industrial partners. The seed for the PreMa project was planted during the workshop associated with the 2nd School in 2016. 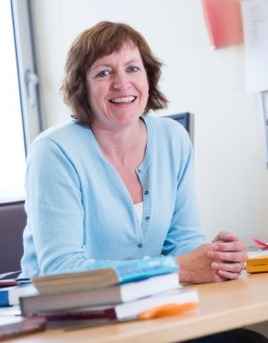 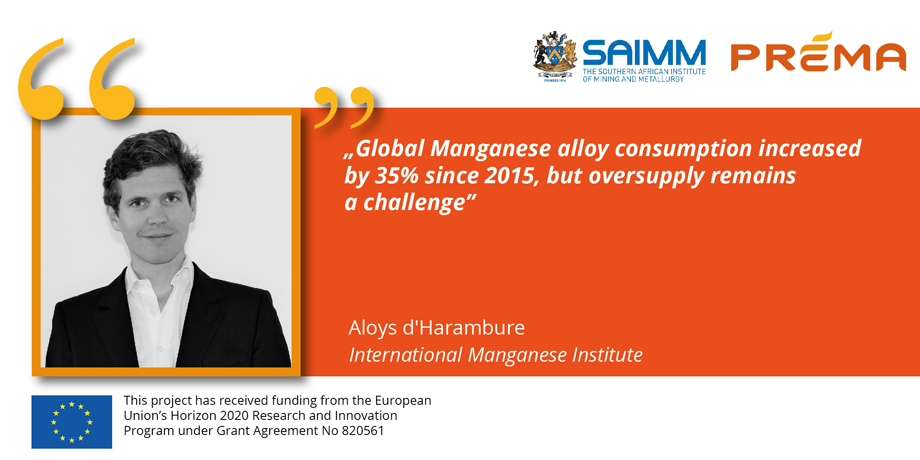 Aloys d’Harambure is the Executive Director of the International Manganese Institute (IMnI), the Paris-based organisation representing the global manganese industry. Aloys joined the IMnI in 2014, as Market Research Manager, focusing on analysing the supply and demand fundamentals of the manganese business. He is a graduate from Montreal business school HEC, where he specialised in market intelligence. Prior to joining the IMnI, he was Business Analyst at the International Chromium Development Association (ICDA). Aloys is a regular speaker at metal and mineral industry events, and other conferences worldwide. 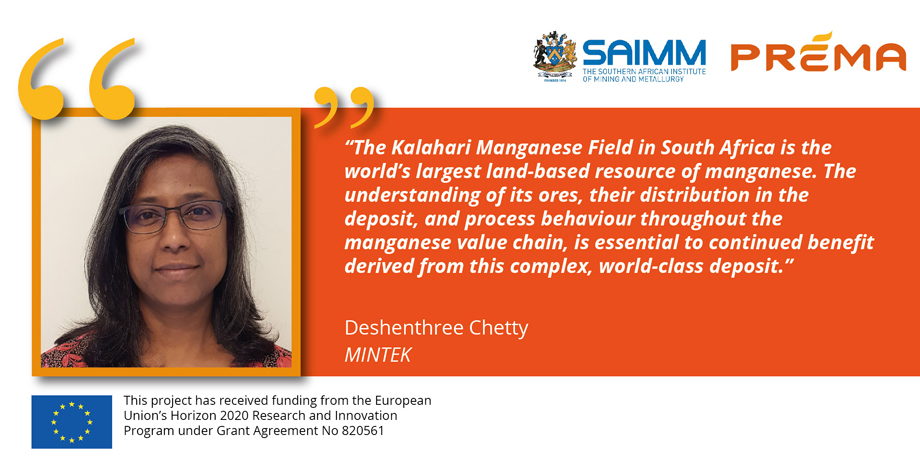 Desh Chetty obtained a PhD in geology at the University of Johannesburg in 2008, and an MSc in geology from the University of Cape Town in 1998. Her PhD focused on geometallurgical and genetic aspects of the northern Kalahari Manganese Field. She has been at Mintek for 22 years and is responsible for research projects covering such topics as process mineralogy (for physical separation, flotation, hydrometallurgy and pyrometallurgy), mineralogical technique development, geometallurgy and environmental mineralogy. She is a fellow of the Geological Society of South Africa, is a member of the Mineralogical Association of South Africa, for which she served as Chair three times, and is a member of the SAIMM.

Geologist with more than 15 years of professional experience in mineralogical characterization. Specialist in optical and electronic microscopy, as well as in high temperature liquid-solid thermodynamic equilibria.

He began his career at the Sorbonne University as a petrologist and geochemist. He joined Eramet in 2011 as an automated SEM specialist. His main areas of research are the quantification of mineral phases, particularly clays, by Qemscan, the link between mineralogy and process efficiency in extractive metallurgy, and the stability of pyrometallurgical furnace walls. 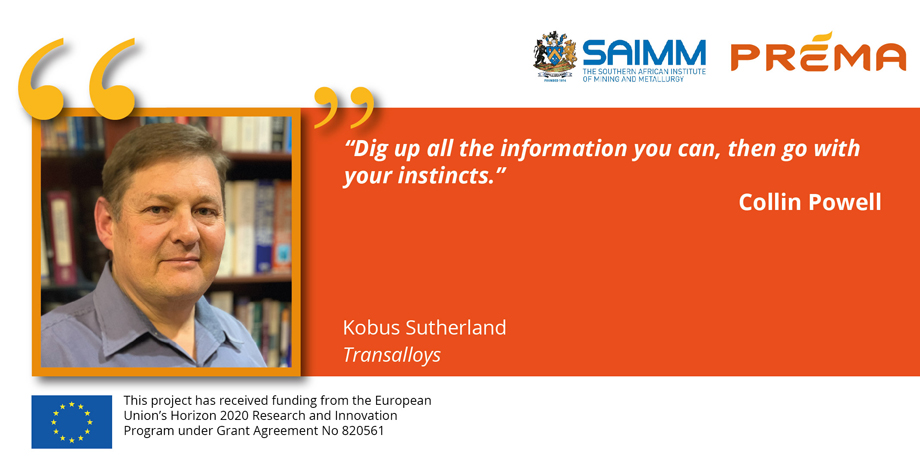 Kobus joined Transalloys in 2008 after working at Highveld Steel and Vanadium as Works Manager- Iron-making. He has 27 years’ experience in the metallurgical industry – mainly in production management as well as in various metallurgical projects (Iron-making - Blast furnace, SAF & OSB smelting and Manganese ferro-alloy production) – His main focus has been on all aspects of continuous improvement in the production environment. Kobus holds a B.Eng. in Metallurgical Engineering, and a MBA. 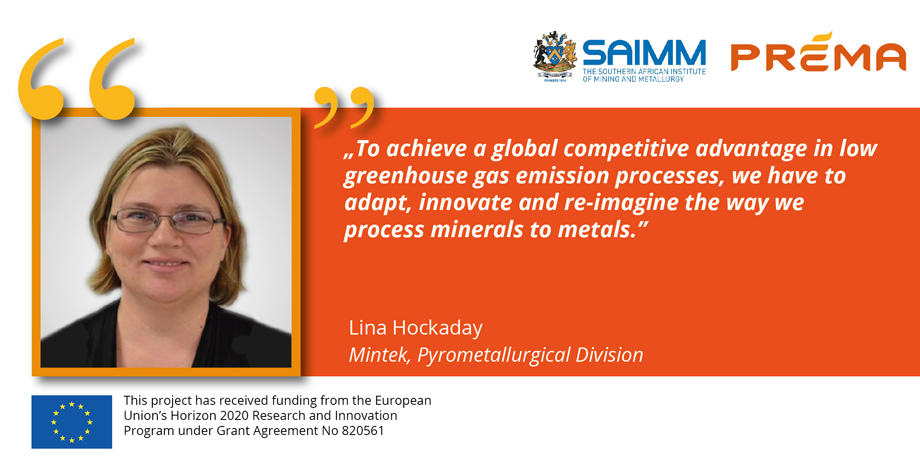 Mrs. S.A.C. (Lina) Hockaday nee Stadler (F) is a Senior Engineer at the Pyrometallurgical Division at Mintek. She joined Mintek in 2002 after obtaining her B. Chem. Eng. (Minerals Processing specialization) and M.Sc. in Extractive Metallurgy at the University of Stellenbosch in South Africa. During 2002 to 2010 she worked in the commercial projects group on various projects including the recovery of precious metals in liquid iron and the smelting of ores to produce design specifications of an industrial ferrochrome DC arc furnace. From 2015 to current, she has been involved in research of new technologies for titanium metal production, chlorination of titanium dioxides in a fluidized bed and the application of renewable energy in minerals processing. She is also involved in research on the utilisation of carbon dioxide as produced by the ferroalloy industry. Since 2016 she is enrolled as a part-time Ph.D. student with the working title of “Solar thermal treatment of Manganese Ores” at the University of Stellenbosch. She has completed post graduate courses on Renewable Energy Systems and Renewable Energy Finance and audited a post-graduate course on Thermal Energy Systems in 2016 through the Centre for Renewable and Sustainable Energy Studies.

Noémie Julia graduated from Chimie ParisTech, Paris’ technical institute of chemistry, in 2017. Her main field of interest is materials, and her experiences at ArcelorMittal (France) and Shiloh Industries (United States) have enabled her to acquire theoretical and applied knowledge in the steel industry. With ERAMET since February 2018 as pyrometallurgical engineer, she contributes to the realization of R&D projects related to the extractive metallurgy of nickel and manganese.

He has over 25 years’ experience in heavy industries (including Mining and Smelting, Pulp and Paper and Food and Beverages Industry), where over 17 years is in the Pyro Metallurgical processes industries (Stainless Steel and Manganese Smelting) in South Africa starting from sourcing all raw materials, agglomeration processes, Metal Recovery Processes, inbound logistics, submerged arc furnace operation, crushing and screening final product, outbound logistics and customer service. He is a Senior Manager at Assmang which is jointly owned by Assore and African Rainbow Minerals, one of the two biggest and integrated Manganese mining and smelting operations in South Africa. He has lead in other World class companies such as Columbus Stainless Steel (Acerinox Group), Nampak South Africa, Mondi Pulp and Paper (Anglo American Group) and South African Breweries (SABMiller) and holds a National Diploma in Chemical Engineering and Bachelor of Technology in Chemical Engineering. In conjunction with Mintek (Council for Mineral Technology) - South Africa, the presenter was involved in the initiation of the comparable study on the performance and reactivity of 9 different combinations of reductants (anthracites and coke) in SAF which has resulted in Assmang Manganese Cato Ridge Works to be one of the World leaders in High Carbon Ferro Manganese Smelter reductants cost curve benchmark. 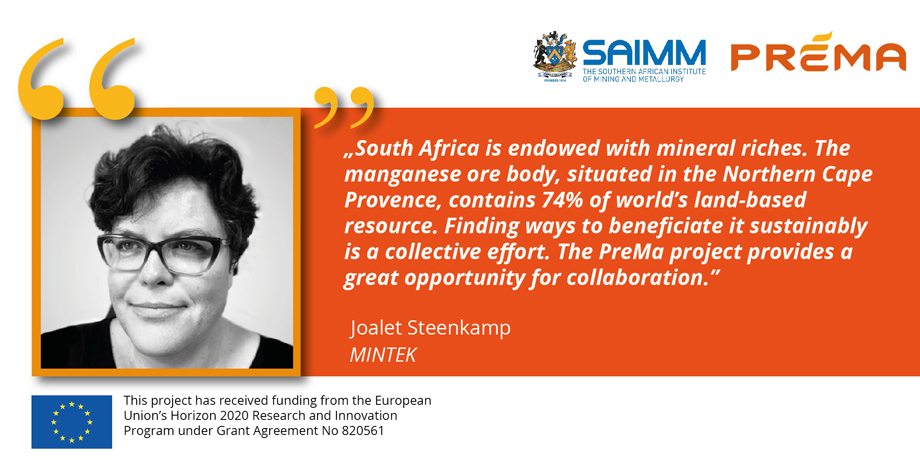 Joalet Steenkamp joined Mintek as Chief Engineer in the Pyrometallury Division in 2014 after completing her PhD studies in Metallurgical Engineering at the University of Pretoria. Her prior work experience includes 14 years in Industry – operations, projects, and research environments (steelmaking, ilmenite roasting and smelting, and manganese ferro-alloy production) – and 3 years in Academia where she taught courses in Pyrometallurgy on both undergraduate and postgraduate level. In 2019, the University of the Witwatersrand appointed Joalet as Visiting Adjunct Professor in the School of Chemical and Metallurgical Engineering for a period of three years. Joalet’s main research interests are furnace containment, with special emphasis on furnace tapping, and production of manganese ferro-alloys. 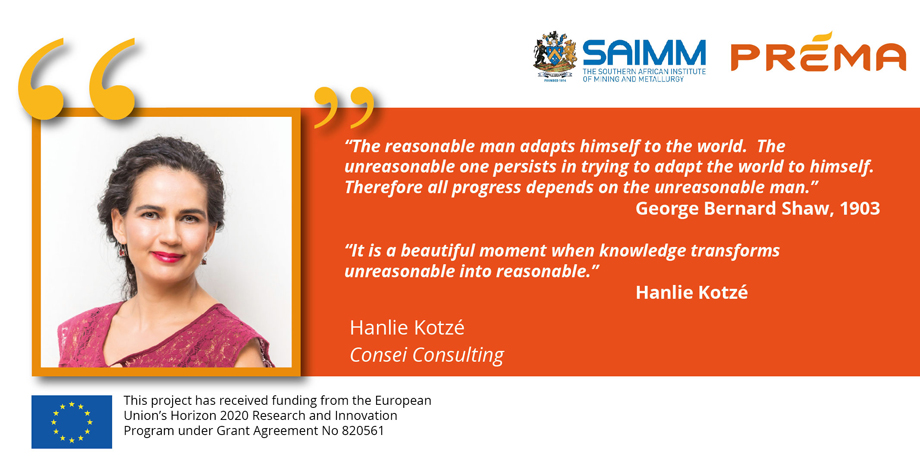 Hanlie Kotzé studied at the University of Pretoria and cut her teeth on industrial ilmenite smelting. In 2008 she obtained her PhD on a TiO2 slag related topic. Since 2013 she consults on pyrometallurgical processes, specialising in AC and DC furnaces, and TiO2 and other slags, and slag interactions. Hanlie enjoys integrating fundamental knowledge with practical applications and constrains to solve problems and improve processes. 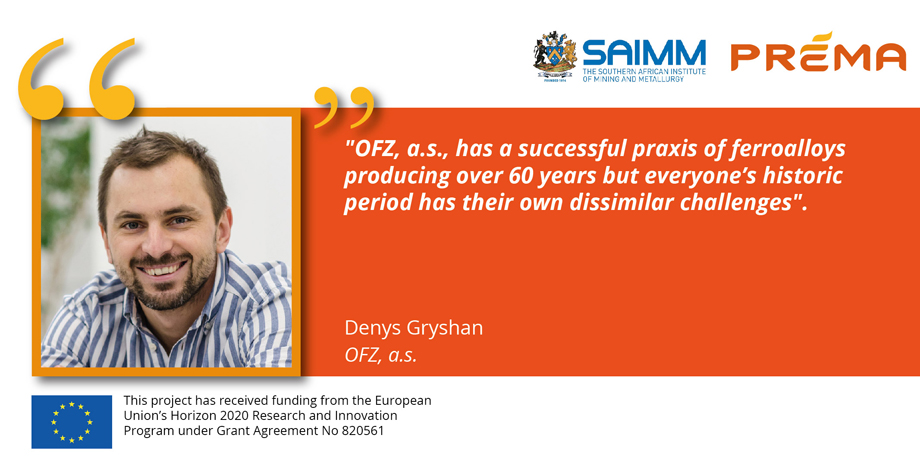 Denys Gryshan has extensive experience in mining and metallurgy: ore benefaction and processing; ferroalloys slag recycling; handling and processing for mining and metallurgical dumps. Start-up projects in raw product processing and metal recovery. Researches related to finding out the correlation relations between electrical features and composition respectively quality of raw materials. Author and co- author of academic and practical research. Co-author of patents for an invention related to the processing of the raw product by means of sensor-based technology. 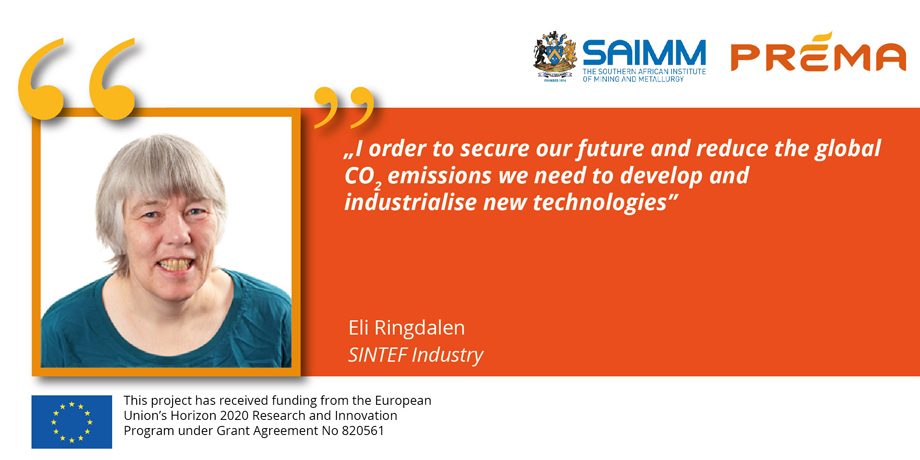 Dr. Eli Ringdalen (F) is a senior research scientist at SINTEF Industry. She has a M.Sc. in Geology and a Ph.D. in Metallurgy from the Norwegian University of Science and Technology. She worked for more than 20 years in different positions within operation, research, and management in various companies in mining and metallurgical industry before she started at SINTEF in 2006. At SINTEF she has been doing research within silicon and ferroalloys and especially manganese alloys. Her main focus has been environmental and energy optimisation and raw materials. 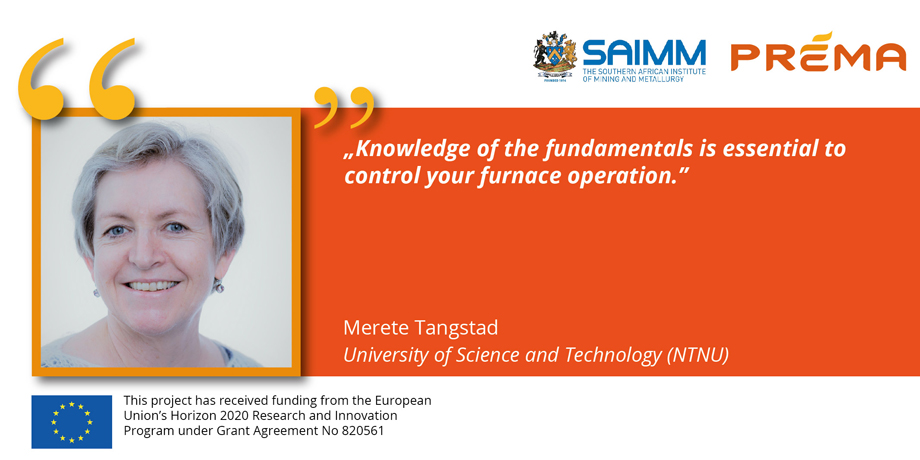 Prof. Merete Tangstad took her MSc and PhD at the Norwegian University of Science and Technology and has since 2004 been a professor at the same university. Previously she worked at Elkem and Eramet mainly focusing on Mn-ferroalloy production. Her main areas are Mn-ferroalloy- and Si-ferroalloy-production in Submerged Arc Furnaces ranging from raw materials, furnace operation and tapping. She has been co-authoring a number of books including Production of manganese ferroalloys (2007).