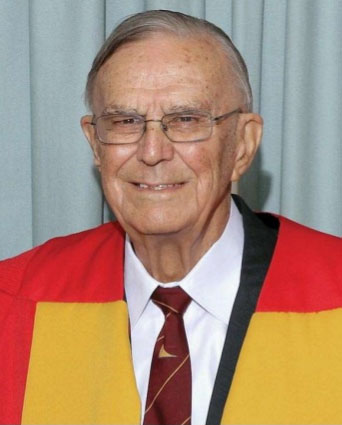 The School of Mining Engineering at the University of the Witwatersrand, in conjunction with the Southern African Institute of Mining and Metallurgy (SAIMM) and the Geostatistical Association of Southern Africa (GASA), are pleased to announce the third Danie Krige Memorial Lecture to be held on the 26 October 2017 at the Wits Club on the campus of the University.

The Memorial Lecture will focus on the subject matter of geostatistics as a remembrance of Professor Danie Krige for his pioneering work, as one of South Africa’s foremost academics, and of course his close association with the School of Mining Engineering at Wits. Danie Krige graduated as a Mining Engineer from the School of Mining Engineering at Wits in 1938 and then worked in industry and for the Government Mining Engineer. Since the early 1960s Danie Krige’s surname has been used to describe the geostatistical techniques of ‘kriging’ in recognition of his distinguished pioneering work in mineral resource evaluation. The term was coined by Georges Matheron from the world-renowned French school of ore evaluation in Fontainebleau, Le Centre de Ge´ostatistique de l’Ecole des Mines de Paris. ‘Kriging’ is now applied worldwide in the fields of exploration, ore evaluation, environmental, petroleum, hydrology, agriculture and other disciplines. After retiring from Anglo Vaal, Danie joined the University of the Witwatersrand in the early 1980’s and made a considerable contribution to the postgraduate programme by developing courses in mineral economics, mining investments, and of course geostatistics, courses which are still taught at postgraduate and undergraduate levels to this day. Danie lectured to postgraduate students and supervised many masters and doctoral theses until 1994 when he retired from Wits. In December 2010 he received an Honorary Doctorate from the University of the Witwatersrand, and in his speech at the graduation ceremony he urged the engineering graduates to contribute their skills to the development of South Africa, and not to forget their alma mater.

The third of the Memorial Lectures, which is held annually, is to be presented by Prof. Chris Prins, Principal Geostatistician at Anglo American South Africa.

Attendees will then proceed to the Wits Club, for the Danie Krige Memorial Lecture, followed by dinner.