Danie Krige - an international household name to anyone who studied or practised the science of evaluating mineral resources for mining purposes, died recently in
Johannesburg.

While his name may not be familiar to many people outside the field, so new and revolutionary were his ideas – applying mathematical statistics to the spatial evaluation of orebodies – that the processes he developed were named after him, becoming known in the industry as ‘kriging’. This technique has helped improve ore evaluation methods and reduce the financial risk of investing in mining projects. 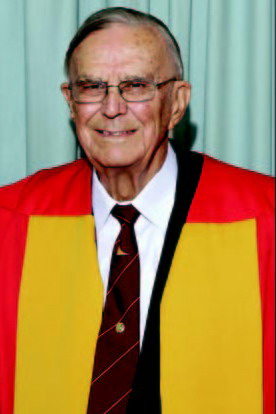 The significance of his work to the global mining industry is difficult to over-estimate; over the years, his work was recognized by such varied sources as Moscow State Mining University, which awarded him an honorary doctorate, and the US National Academy of Engineering, where he was the first South African ever to be elected a Foreign Associate in Earth Resources Engineering.

As recently as last year, he received the Order of the Baobab (Silver) from the South African President for exceptional and distinguished contributions to business and the economy, science, medicine, and technological innovation and community service. The only other mining person to have received this award is now-Deputy President of the African National Congress, Cyril Ramaphosa, for his contribution during the democratic transformation negotiations.

Through his career, Krige received several awards from bodies like the SA Institute of Mining and Metallurgy, the US Society for Mining, Metallurgy & Exploration, the South African Academy for Science and Arts, the International Association for Mathematical Geology, the International APCOM Council (Application of Computers and Operations Research in the Mineral Industry), and the University of Antofagasta in Chile.

Born Daniel Gerhardus Krige in Bothaville, Free State in 1919, Krige matriculated at the age of just 15 from Monument High School in Krugersdorp. By 19, the age at which many people finish high school, he had graduated from Wits University with a Bachelor’s degree in mining engineering.

He began his career at Anglo Transvaal (later Anglovaal) in 1938, where he cut his teeth on a number of gold mines doing surveying, sampling, and ore valuation. In 1943, he joined the department of the Government Mining Engineer, where his work included designing the uranium pricing formula for negotiation with British and American authorities; this laid the groundwork for South Africa to develop a profitable uranium industry in the early 1950s.

It was during this time – when he was barely 30 years old – that he began his pioneering work on applying insights in statistics to the valuation of new gold mines, using a limited number of boreholes. Part of his work at the GME involved granting mining leases for gold mines, but he was concerned that deep gold mines were being established on the basis of very few boreholes and without proper scientific analysis of this scanty data. The situation posed very high risks to profitability, but there seemed to be no real alternative.

Building on the work of fellow-statistician Herbert Sichel, Krige started applying statistics to the data, eventually developing a logical and scientifically based procedure for evaluating the sparse information gleaned from borehole drilling. This was applied not only to new mines but also to ore reserve calculations for existing operations, and earned him his Masters degree in mining engineering – also from Wits University.

In a seminal 1951 paper published in the Journal of the Chemical, Metallurgical and Mining Society of South Africa, he pursued a statistical explanation of the conditional biases in ore block valuations – the basis for the practice of kriging.

Krige returned to Anglovaal as Group Financial Engineer in 1951, where he was responsible for the company’s ore evaluation, mine surveying, financial analyses of mining projects, share valuations and technical computing facilities. During the early 1960s, he implemented geostatistical kriging procedures on Anglovaal’s two large gold mines; this was the first routine application of the kriging of ore reserves in the world.

There was particular interest in his ideas from France after some of his papers were translated into French in 1955, eventually resulting in the creation of the famous research centre for ore evaluation in Fontainebleau, Le Centre de Geostatistique de l’École des Mines de Paris.

He retired from the private sector in 1981, taking up the post of Professor of Mineral Economics at the School of Mining Engineering at Wits University until 1991 – where he gave mainly postgraduate courses in geostatistics and mining economics and supervised many Masters and Doctoral theses. His research continued unabated – especially into practical applications of geostatistics in ore evaluation – leading to his publication of some 90 technical papers world-wide over the course of his career.

Even after his retirement from academia, he continued with research, lecturing and publications, and consulted in resource/reserve valuation and financial analysis for several local and global mining companies. Issued by: Sally Braham Public Relations. Tel: +27 11 (0) 646-9322, E-Mail: sally@sbpr.co.za. 22 April 2013 – Johannesburg, South Africa