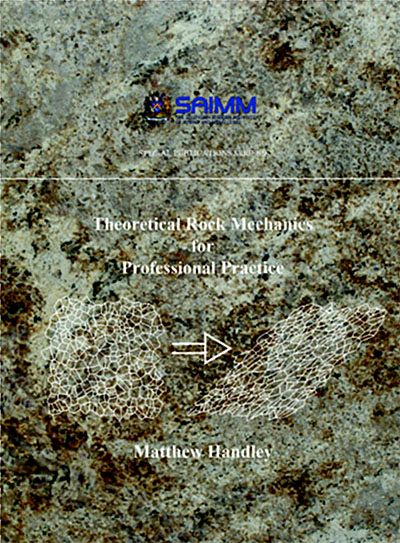 This incompleteness in the classic texts was not the result of the omission of important material by any of the authors of these texts, but the result of the assumed level of learning of the reader. Readers with an advanced tertiary engineering background would understand the work whilst almost all others would struggle. Most texts, for example Biot (1965), Fung (1965), Jaeger and Cook (1979) and Brady and Brown (2006) all require, in differing proportions, a grounding in solid statics and dynamics, prior knowledge of the calculus, including partial differential equations, linear algebra, and tensor calculus, when introducing fundamental concepts such as stress and strain. A sampling of the texts consulted by the author appears below.

Such high-level introductions to stress and strain can never be informative to the uninitiated, and this is part of the reason why so many flounder in the rock mechanics certificate examinations, even when asked to perform simple calculations and interpretations. In order to make the theory accessible to all, these more complete dissertations on stress and strain were stripped of much of their content, and re-introduced in simplified form in a book edited by Budavari (1983). In this book, (which is not wrong in any of its essentials) the theory of stress and strain are reduced to the notion that stress is a vector, defined by force divided by area, whilst strain is a ratio of change in length of a body through deformation with respect to some original length. These notions while not essentially wrong, are so reduced with respect to the reality that no candidate can actually develop from them a proper understanding of what the quantities of stress and strain actually are, unless they are prepared to make the leap from this text and grapple with more advanced (and complete) texts on the subject. Furthermore, stresses and strains are then treated as scalar quantities in two dimensions, whereas a three-dimensional view is essential for any proper understanding of rockmass behaviour in a mine. Therefore, in the opinion of the author, the practice of rock mechanics has stagnated within a reduced two-dimensional view of what is very much at least a three-dimensional problem, for the last thirty to forty years.

In response to this observation, the author spent the last ten years developing more accessible texts on the fundamentals in rock mechanics, which were presented as lectures on rock mechanics to undergraduate mining engineering and geology students at the University of Pretoria. The litmus test of these texts was that the geology students made equally good progress as the engineering students, even though they had lesser mathematical backgrounds. This encourages the author to believe that the content of the book will be equally understandable to the uninitiated as the reduced texts such as those in Budavari (1983) were.

The price that the candidate has to pay is to develop a three-dimensional view of the forces, displacements, and hence stresses and strains that develop within rockmasses in mines, and to understand exactly what they are. The advantage is that the candidate will build a far clearer and deeper understanding of what is actually happening in a rock mass, and therefore will be far better equipped to understand the output of numerical models, which are at least three-dimensional (static), and sometimes four-dimensional (dynamic). Candidates with this background will therefore be able to make the right interpretations of the model outputs, and ultimately, to draw the correct conclusions, which are direct inputs into subsequent decision-making. This will result in the advancement of the practice of rock engineering in the future, with the concomitant improvement in rock-related safety in mines, both shallow, and deep.

This book is not intended to supplant the learning material for the rock mechanics certificate that will be written for the MQA in the short- to medium-term. However, in accordance with the ninth ECSA exit level outcome: Independent Learning Ability, the learning texts for the rock mechanics certificate should provide a basis for life-long learning, and should therefore include a description on the fundamental theory of this nature, otherwise the transition to more advanced texts will be too difficult. Providing uninitiated candidates with watered-down concepts of the fundamentals of rock mechanics - as has been done in the past - will not only fail to do this, but will constitute a barrier to further learning by the candidate, and therefore lead to a permanent barrier to real progress in the engineering science of rock mechanics, as it is practised in the mines in South Africa.

Matthew Handley has spent thirty-seven years in, or associated with, the mining industry in rock engineering, geology and engineering geology. Most of the first twenty-one years (1979-1999 inclusive) were spent between Western Deep Levels Gold Mine, the Chamber of Mines Research Organisation, the CSIR Division of Mining Technology, and postgraduate studies at the University of Minnesota, USA, developing a speciality in deep level mining rock mechanics and advanced numerical modelling techniques. The following decade (2000- 2008 inclusive) consisted primarily of teaching undergraduate and post graduate courses in the Department of Mining Engineering at the University of Pretoria as Associate Professor of Rock Mechanics, and later as Professor of Rock Mechanics. The author left the University of Pretoria in November 2008 to write a book on theoretical rock mechanics for the tabular hard rock gold and platinum mines in South Africa, and to consult to the mining industry in South Africa on rock mechanics. The author lives with his wife and family in Pretoria.

Download the form here or fill in the form below

Please fill in and return this form to:
Prudence Ntumeleng
Tel: (011) 834-1273
Email: saimmreception@saimm.co.za

Form not found or is not published