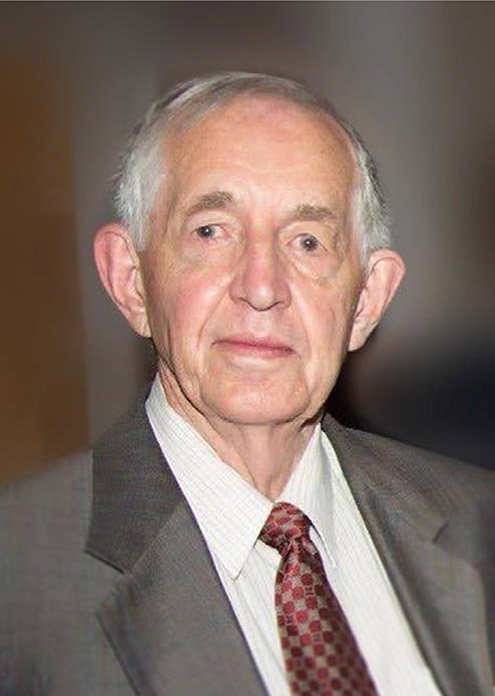 Henry Edward James was born in Parys on 19 April 1939, and was educated at Grey College in Bloemfontein. He completed high school there in 1956. He spent a year with Gold Fields working at Libanon and Venterspost gold mines before going to the University of the Witwatersrand on a Chamber of Mines bursary to study chemical engineering. After graduating in 1961 with a BSc degree, he was awarded a postgraduate bursary by the Atomic Energy Board (AEB), which led to an MSc degree in chemical engineering from the same university. The subject of his thesis was 'The dynamic response of a packed tower to step changes in the concentration of the inlet gas for a single-phase gas and countercurrent gas-liquid flow'. In 1964, Henry began his professional career as a research officer with the Extraction Metallurgy Division of the AEB.

It was around this time that Henry met the love of his life, a secretary who was employed at the National Institute for Metallurgy (NIM), Joan Barnes. Joan had undertaken the typing of Henry's MSc dissertation outside working hours. Henry and Joan were married on 4 September 1965, and went on to enjoy just over 50 years of married life together.

From 1965 to 1969, Henry was chief investigator of a collaborative project between the AEB, the Nuclear Fuels Corporation of South Africa (NUFCOR), and the French Atomic Energy Commission (CEA) on the production of uranium tetrafluoride (UF4) from South African uranium concentrates in a high-temperature moving-bed reactor. During that period, he spent six months in France supervising test work at the Le Bouchet refinery of the CEA. The project culminated in the installation of a full-scale UF4 reactor at NUFCOR works.

This was a very happy period for the young married couple, who got to see the sights and experience life in France for a while. Henry and Joan lived in Paris from June to November 1966, staying at the Hotel St Jacques, Rue Des Ecole, two blocks away from Sorbonne University.

From 1969 to 1971, Henry was chief investigator of a collaborative project between the AEB and NUFCOR on the techno-economic feasibility of establishing a commercial plant in South Africa for the production of uranium hexafluoride (UF6) from UF4. He was responsible for assessing overseas technology for the production of UF4 and UF6, with a view to selecting the optimum process route for South African conditions, and for gathering capital and operating cost information on complete process routes from the collection of ammonium diuranate slurry at the gold mines to the export of nuclear-grade UF6.

Henry was the author of the final feasibility report submitted to an ad hoc committee of the AEB Board and representatives of the uranium industry. In 1971, Henry was appointed Deputy Director of the Extraction Metallurgy Division of the AEB, and from1971 to 1975 was involved in a supervisory capacity in the design, construction, and erection at Pelindaba of a large pilot plant for the production of UF6 as feed material to the enrichment pilot plant of the Uranium Enrichment Corporation of South Africa.

In 1976, he was promoted to Director of the Extraction Metallurgy Division, and assumed responsibility for a wide range of research programmes in the field of uranium extraction. These were undertaken on a collaborative basis by the AEB, the National Institute for Metallurgy (NIM), and mining companies with interests in uranium production. One of the most successful projects undertaken during the period 1976 to 1980 was the transfer to industry of the technology associated with the recovery of uranium from unclarified Witwatersrand acid-leach liquors in the NIMCIX continuous upflow fluidized-bed ion-exchange contactor. The contactor was adopted by a number of mining companies for new full-scale uranium plants built between 1977 and 1980.

In 1978, Henry was invited by the International Atomic Energy Agency (lAEA) to chair a Consultants Panel charged with the task of writing a textbook on the extractive metallurgy of uranium. This book was published by the IAEA in 1980 under the title 'Significance of mineralogy in the development of flowsheets for processing uranium ores'. The project led to the establishment of an International Working Group on Uranium Extraction under the joint aegis of the IAEA and the Nuclear Energy Agency of the Organisation for Economic Co-operation and Development. Henry played an important role in defining the objectives of the Working Group and, as chairman from 1978 to 1980, guided its activities during its formative years. The most significant achievement of this Working Group was the publication in 1983 of a comprehensive book on the extractive metallurgy of uranium, entitled 'Uranium Extraction Technology'.

In 1980, he was appointed a Vice President of NIM, now Mintek. His duties as a member of Mintek's top-management team included responsibility for the policy aspects of manpower planning, development, and training; responsibility for safety at Mintek in terms of the Mines and Works Act; and responsibility for the Technical Services Division and the newly formed Techno-economics and Information Division, which undertook a wide range of projects in the area of techno-economics and provided services with respect to computerized information retrieval, publishing, conference organization, and public relations for Mintek. Another highlight of Henry's career was the Mintek 50 celebratory conference in 1984 that he managed so successfully. Henry made an invaluable contribution to the growth and development of what is one of the world's largest and leading research and development organizations.

Henry was registered as a Professional Engineer, and was elected as a Fellow of SAIMM on 20 February 1976. He first became a Council Member of the Institute in 1978/1979. One of his most difficult tasks on Council was his chairmanship of the Technical Programme and Publications Committee for the 12th CMMI Congress, which was held in 1982. The proceedings ran to two volumes and comprised more than a thousand pages.

Henry became President of SAIMM in 1985. His Presidential Address was entitled 'In search of a new development strategy for the beneficiation and export of South Africa's minerals'. This paper can be found at https://www.saimm.co.za/Journal/v085n09p309.pdf

Dr Louw Alberts (a past President of Mintek, and later Director General of the Department of Mineral and Energy Affairs) described the presentation as providing ’a wide-ranging yet very knowledgeable insight’ into ’probably the most important topic that could be selected’ for discussion on an SAIMM platform, covering ’the challenges required for a fuller exploitation of our most important natural resources in this country’. He described Henry as ’someone whom I have known for many years as an indefatigable enthusiast and worker in the fields that concern this Institute’, and said that ’the address was presented with clarity and a thoroughness typical of the speaker and the research organization that he represents’.

Henry and Joan James felt privileged to attend the annual Banquets and annual Council dinners of SAIMM on a regular basis from 1985 to 2015 (30 years). These events not only became highlights in their social calendar but, more importantly, led to the building of enduring friendships with SAIMM members and their spouses. Because the SAIMM Banquet is generally held on the first Saturday evening of March, there were many occasions when the date fell on or very near to Joan's birthday.

Henry was awarded Honorary Life Fellowship of SAIMM on 23 June 1995.

Henry and Joan have two sons, Marc (1969) and Darrell (1974). In turn, Darrell and his wife Amanda (Mandy) (nee Gilman) also have two sons, Michael (2010) and Ethan (2015). Henry's grandsons were his pride and joy, and he loved showing pictures of them to his friends. Henry had a deep love for his family, and enjoyed exploring and documenting his family history.

Henry James is appreciated for his experience, his approach to problems, and his ability for hard work. He was admired for the way in which he cared about other people, and the genuine interest he showed in so many subjects. He was always an interesting person to talk to. He was a very fine man, and will be missed greatly.