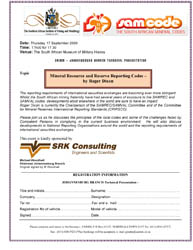 Topic: Mineral Resource and Reserve Reporting Codes – by Roger Dixon
Thursday 17 September 2009
17H00 for 17:30
at The South African Museum of Military History
Download the registration form
The reporting requirements of international securities exchanges are becoming ever more stringent. Whilst the South African mining fraternity have had several years of exposure to the SAMREC and SAMVAL codes, developments afoot elsewhere in the world are sure to have an impact.
Roger Dixon is currently the Chairperson of the SAMREC/SAMVAL Committee and of the Committee for Mineral Reserves International Reporting Standards (CRIRSCO).
Please join us as he discusses the principles of the local codes and some of the challenges faced by Competent Persons in complying in the current business environment.  He will also discuss developments in National Reporting Organisations around the world and the reporting requirements of international securities exchanges.

The President and Council of the Institute invite members, their guests and members of other constituent societies to attend the Annual General Meeting 2009 Thursday, 13 August 2009

1. Welcome
2. Confirmation of minutes
3. Obituaries
4. Honorary Fellow—I.J. Walton (awarded posthumously)
5. Brigadier Stokes Memorial Award
6. Presentation of awards, medals and certificates
7. Presentation of student prizes
8. Annual report of the council and accounts for the year ended 30 June 2009
9. Declaration of election of office bearers and members of council for the year
2009/2010
10. Election of auditors and honorary legal advisors for the year 2009/2010
11. General
12. Induction of President—J.C. Ngoma
13. Presidential address
14. Vote of thanks
15. Photographs of all council members
A cocktail party will be held after the meeting (see separate notice)

By A.M. Garbers-Craig
Without refractory materials most of the scientific and technological inventions and developments we know today would not have been possible. The existence of virtually everything we see around us, or use in everyday life, is in some way dependent on refractory materials. Refractories are therefore facilitating or enabling materials, and are essential to the successful operation of any industry in which high temperatures are used .
The word ‘refractory’ is derived from the Latin word, ‘refractarius’, which means stubborn . These materials resist high temperatures, have high-quality mechanical and thermomechanical properties, have high corrosion resistance, act as a heat buffer between the walls of the containing vessel and the hot charge, and conserve process heat.
Reliability and long service life are required from materials when put into operation. Refractory cost is therefore expressed in terms of tons of product produced, i.e. the cost of the refractory material is weighed against useful life and replacement cost. A refractory material is a type of engineering ceramic called an ‘industrial ceramic’ . Refractory materials, however, have
coarser grain sizes and higher porosities than engineering ceramics, and consist of aggregate particles, held together by a bonding (matrix) phase, where both the aggregate and the bond can be multiphased .
Download the full PDF here...
Read more ...

President’s message for the New Year...

At the beginning of a brand new year, one automatically reflects on the past year, and contemplates what 2009 will bring. I am sure you will agree that 2008 was a very eventful year for our industry, which started with the South African power crisis in January, and ended with the global financial crisis that resulted in an economic slowdown, currency volatility, a sharp pull-back in commodity prices and rising unemployment. Economists predict that 2009 will be a tough year, that we need to tighten our belts, and that we will have our fair share of challenges. Fortunately the majority of economists remain optimistic about the resilience of our economy, and some even predict that by the end of 2009 the South African economy might be stronger than is considered possible at present.

My wishes for us who work in the mining and metallurgical industry for 2009 is therefore that we will seize the opportunities and challenges that lie ahead, that we will persevere, strive towards excellence, capitalize on positive news and celebrate our achievements, notwithstanding the hardships. And on a more personal note: my wishes for you for 2009 are that you and your loved ones will enjoy good health, that you will find inspiration, meaning and happiness in your lives, and that you will savour the good times! May 2009 pleasantly surprise us! A.M. Garbers-Craig President